I'm currently converting a 718 M Platform into a K unit and would like to get some pictures and possibly details, of the factory main rail gussets etc, so I can build some equivalents.
I have the TD body-detail drawing that was kindly supplied by a forum member which show the gussets/construction in 2D form, but some pictures and build details of the area would be invaluable.

If someone could supply some pictures of the area/gussets etc it would be greatly appreciated!

(Unfortunately there are no TD K Pinzgauers in the country .....there is a 710 K somewhere in Queensland, but thats about 2000 km north of here

......... so getting details of how the factory constructs the area is somewhat sketchy)

I should have read this a bit earlier as I just came back from my garage
now. I will go back to do some work on monday, then I can take some
photos for you as my 718K is disassembled now anyway.

I had a few of the original gussets, rails and body panels for the K-model
some time ago. Maybe I have some left that didn't sell so I can take some
pictures.

Thanks Richard, that would be great.

I've been following your 718K rebuild with interest.....keep up the good work!

Thanks a lot for those kind words Peter!

I had to take the fuel tank off today anyway as it started to leak in my garage. (different story here)

It was still almost impossible to take good pictures. So I just took a few
random shots of the area you need. I hope they will help you to get an
idea how it looks like on a 718K.


The pictures are from the right side with the fuel tank removed. 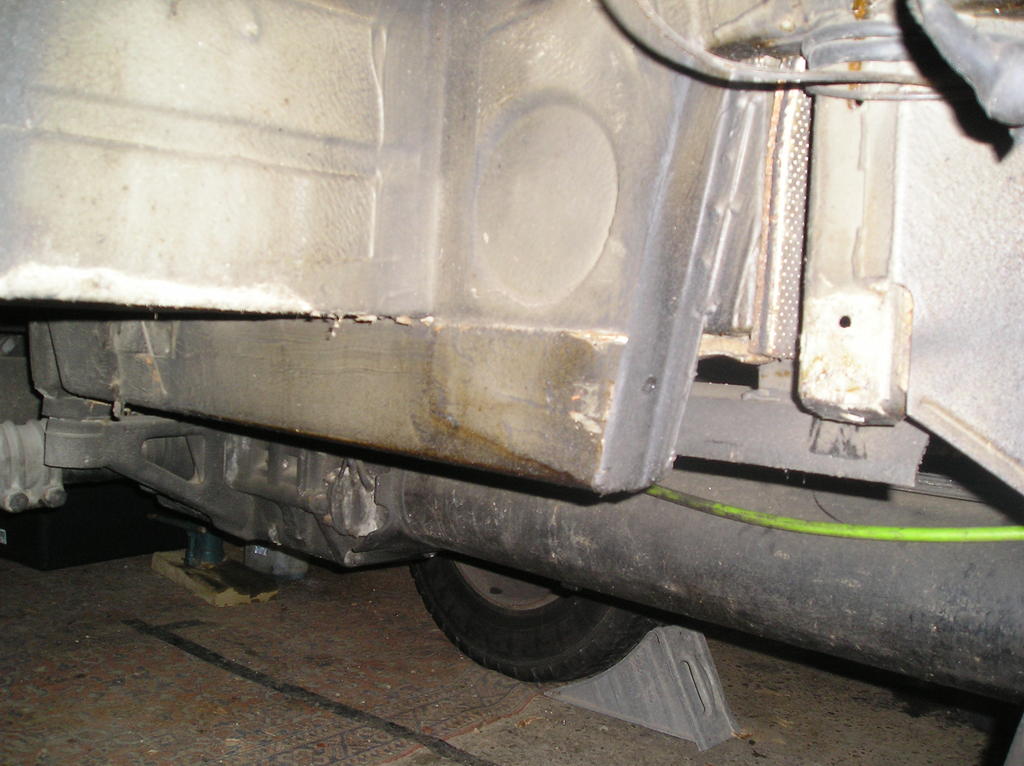 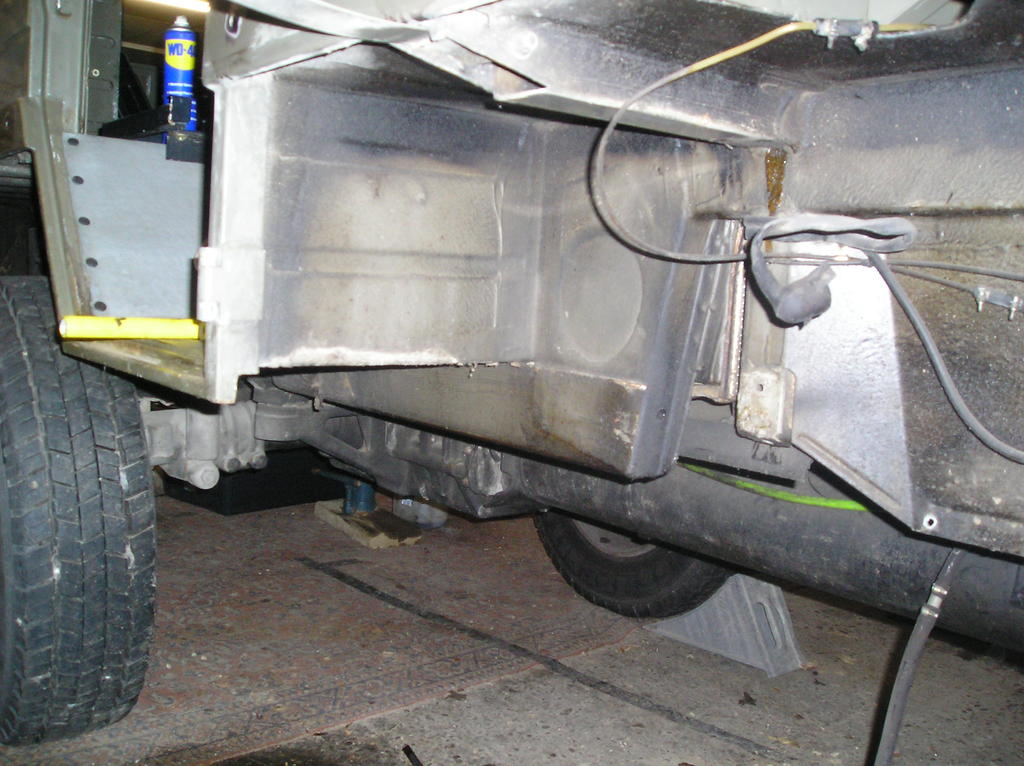 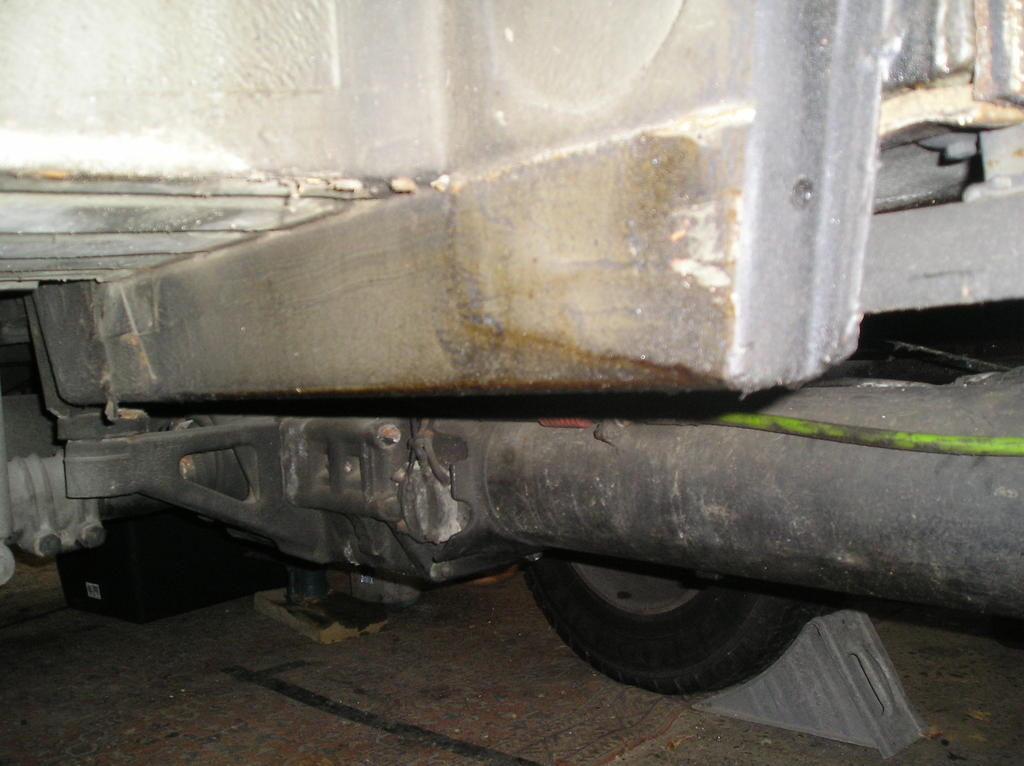 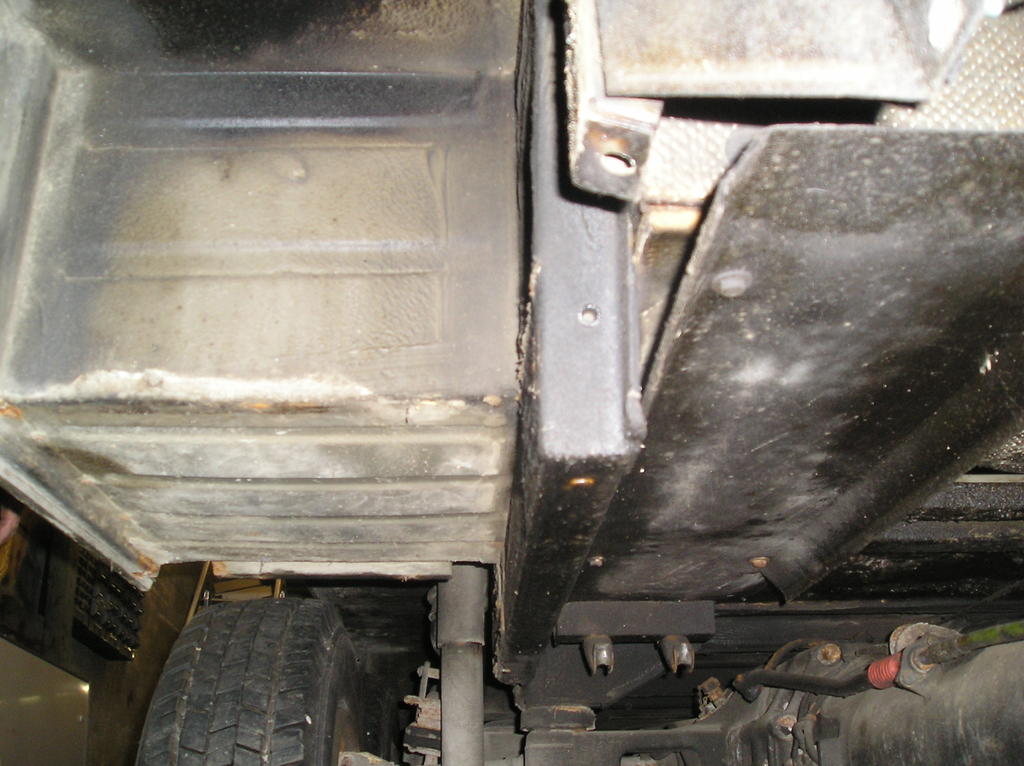 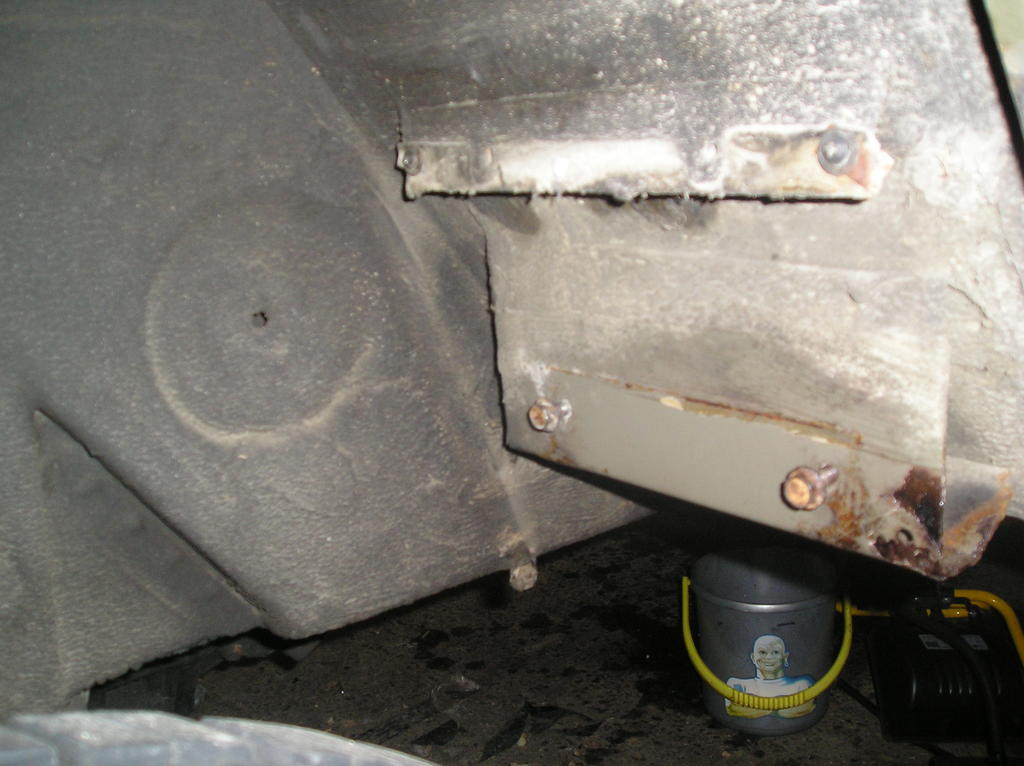 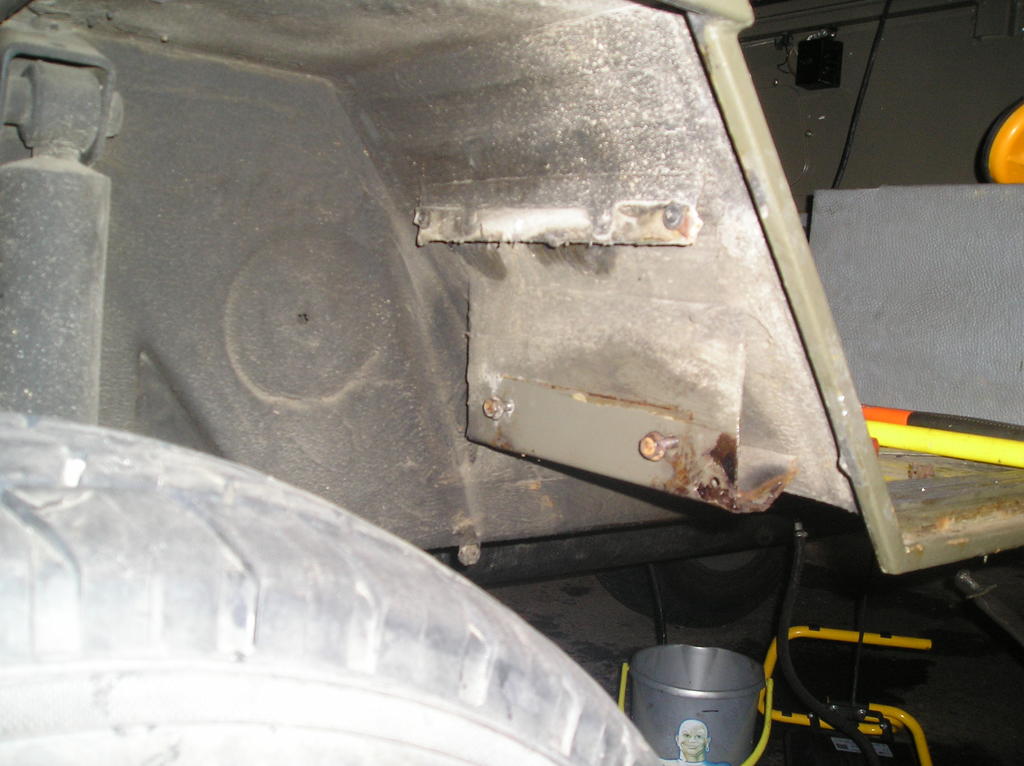 If you need some more photos just tell me what particular area/angle you need and I will take more pictures for you.

Thanks for those Richard, they are a great help in trying to get my head around how they constructed that particular section of the body.

If I can ask a few questions or possibly get for a few more pics in the future it would be appreciated.

Thanks again, and keep up the good work on your 718.
Peter
www.ozpinz.com
Nach oben

No problem, you are welcome. I will try to answer everything the best I can.
Ich hatte mal Superkräfte bis sie mir der Psychiater wegnahm....
Nach oben

I've studied your photo's in great detail and I think I've got my head around how they put that part together, although I'm not positive as to me it would seem a little weak......however I've done a few quick sketches which are my interpretation of the manufacturing assembly.

The second sketch is a ghost image of the parts, but it has a section/cut plane shown, the resultant view of which is shown in the third sketch.

Are the sketches indicative of how you believe the bits/parts are made and assembled?

Thanks again for your help, this long range design is somewhat difficult!

That is pretty much what it looks like. There is just one more gusset.
I tried to integrate it into your sketches. I'm sorry about altering them
but this way it is more likely that we mean the same thing. 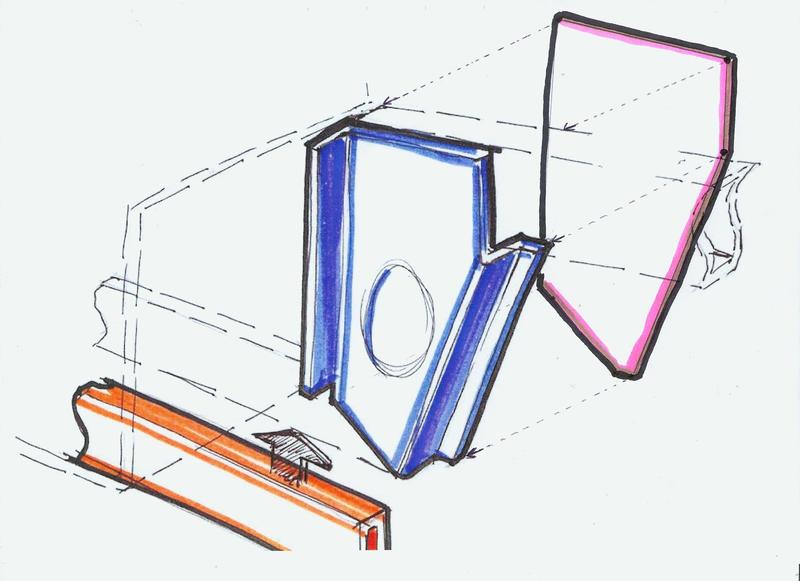 The Problem is that I can only see the lowest 7 centimetres of the piece that is not covered by the (green on the sketch) sheet metal.

If I look at the overlap of the purple gusset to the green sheet metal I
think it looks like this in detail. I am not sure though because my
Pinzgauer has a lot of underbody coating on in this area. 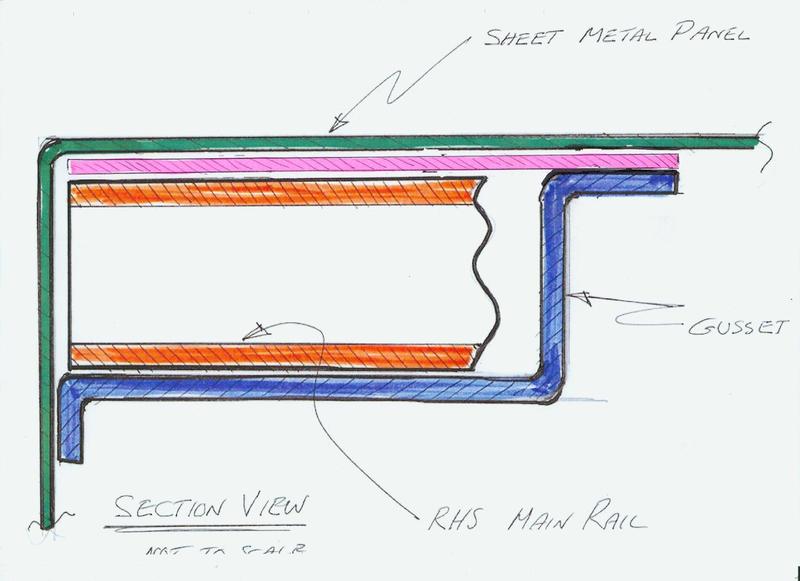 It could be like this too. It would even make more sense to me to build
the gussets like that. 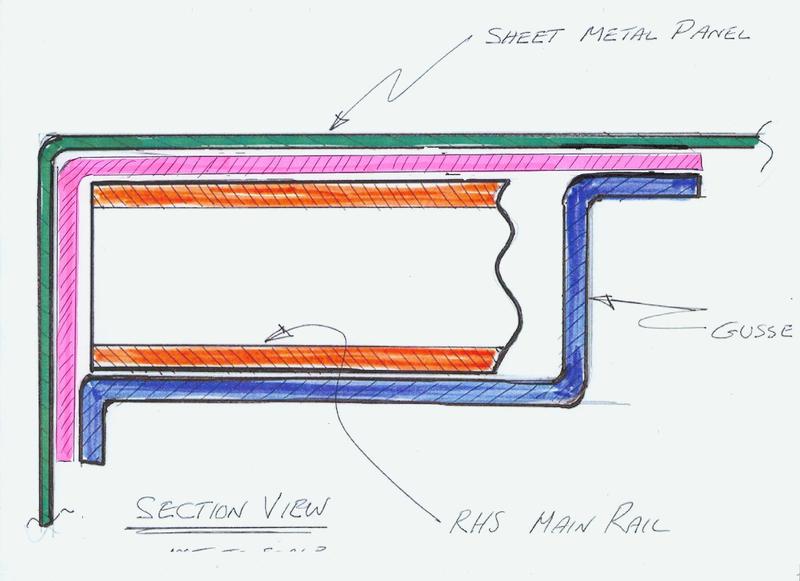 By next week I will get a 710K body tub. I think I will cut it to pieces
to see what it definitively looks like.

hi,
great what u r doing, arent there any CAD-designs of SDP or followers ? With this lousy sales they should declare it opensource, i think there are many IT- and engineers so they could even benefit from improvements, or do military customers ask a shop : can you build this car, of course they would ask the guys with the forms and parts, i.e. the owner of pinzgauer...
Lutz
712 SAN-CH
Pinzgauer RB 718 TD
Nach oben

If you need welding plates tell me
Nach oben

here some further pictures from the frame. They are from a 712K ( Falke) the main frame´s are the same , the td had only other door entry supports and at the lateral floor panel middle the stiffening is vertical .
Nach oben

Ok forget what I wrote before.

This ist what I have seen on mine. Thought that it was going up to the main support rail. 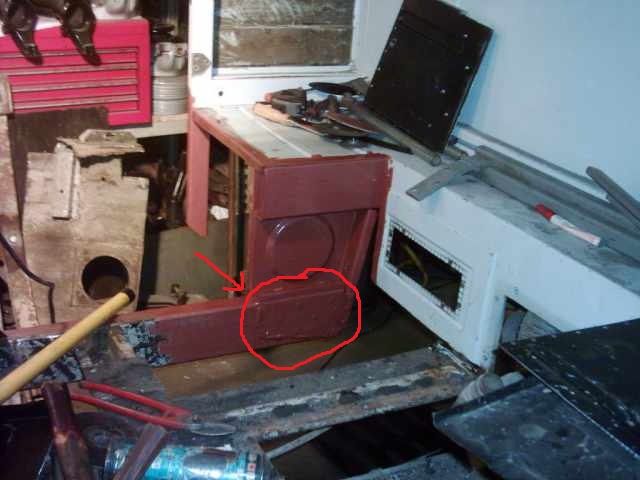 Thanks Wolfgang for clarification, at least I do not need to cut the 710k apart now.

Thanks Richard and Wolfgang for the info/pics.

Richard; I personally would have agreed with your original thoughts in regards to a second gusset as per your modifications to the sketches but I disregarded the idea because because it would produce a bulge on the inside panel where the gusset welded to the top rail.

On analysising Wolfgang's pics, I too noticed that same pic that you did, but am confused as to what happens to that rib at the top.....at first I thought it may have continued up to the top rail where it was welded to the underside.
I also thought that the round depression punched in the external gusset may have been used to "reach across" to the inside gusset (they could plug weld the two gussets together then) ....I guess I'II have to study the pics further.

Anyway I'II leave you alone for now as I'm sure you've got a lot of your own stuff to do on your 718...... Thanks again for all yourhelp, I really appreciate it!

Wolfgang; Thanks for the pics, they make understanding the assembly a lot clearer.......I'm still not totally sure of how they constructed the area but I'm a lot closer than I was a few weeks ago

You certainly have some interesting vehicles and projects there.
Zuletzt geändert von Profpinz am Do Jan 05, 2012 12:01, insgesamt 2-mal geändert.
Peter
www.ozpinz.com
Nach oben

Thanks to Richard and Wolfgang's pics and information, I was able to develop CAD drawings for the ribs/chassis rails that run under the side door entrances, that are close to the original factory design.
Using the CAD data, I had the parts cut and folded in 3mm steel (3mm is too thick for my folder).
I've only test assembled all the parts so far (you can see the clamps, peanuts and cleco's holding it all together) but in the next few weeks I'II weld the parts in place then do the other side.
Once again thanks to help from guys on the Forum I've been able to accomplish this stage of the rebuild.

wow - a fascinating job! Did you order the black panels from Graz?
And will you build a door on the left side too?

Good to hear from you...Hopefully next time you get to Melbourne, the 718 will be ready to take you on a trip.

I am having doors on both sides and yes, the panels came from Graz, but unfortunately they don't have some at present.
S-Tec didn't have the left hand side "box" or entrance frame, so I got two rights and have converted them to left.

BTW, I've held off modifying the front doors to rears, because with a bit of luck I may find some rears before I really need the rear doors......if not I'II finish my "conversion"....pic attached.

looks very well !
because you don´t have pressed panels as welding parts, maybe you can weld a I or X steel inside the frames to make them stronger?! At the door entry supports you have to reweld the ends on , if you want to make an original door stock. tell me if you need the panels for door latch, i have cuted out pieces from slaughter and crashed Pinzgauers. The sideway panels can easy make by cutting the boards and weld them in. See my pictures. i have to look, maybe i find a right rear doors for you, one new left door i can offer you . Rebuild some by cutting OEM front doors makes no sense, they are complete different, show pictures. look also to perform proby areas